So I’ve ended up accidentally being active with my writings and visual novels this year at Animefest Dallas! The folks in the visual novel room have been really cool and very supportive. 🙂 So here we go again soon! This post will be edited throughout the day.

We’re still working on Matters of the Heart, though I haven’t updated in a bit. I’m aiming to have at the very least a demo of the visual novel ready to go for Akon Dallas on June 3, 2016. Make sure to keep your eyes and ears peeled!

Decided it was about time for an update as to what I’ve been doing. This summer I’m working on some of my last few classes for my bachelor’s degree (comm tech/arts coursework), my web development skills, my Python coding skills, and both The Pirate King’s Daughter and The Lonely. The Lonely actually has a lot more prose that’s been written out for it, so I’m glad for that. I’ve already got a programmer for PKD – one of my dear friends from college. He’s interested in the project so far. I’ll need to find an artist for both projects.

I got a lot of structuring done for The Lonely. It’s broken into 12 “episodes”. I’m very happy with what I have right now, but I do know it needs some pruning before I can have a go at it. I’m excited, because it’ll be my first light novel project, but I need to actually purchase some light novels so I can better grasp what I’m doing… Does anyone have any suggestions?

I’ve also reached out to a couple of artists. I really, really need someone who is good at illustrating in monotones and illustrating monsters. If you know anyone please forward them on to me. Am looking to pay for the illustrations for The Lonely. 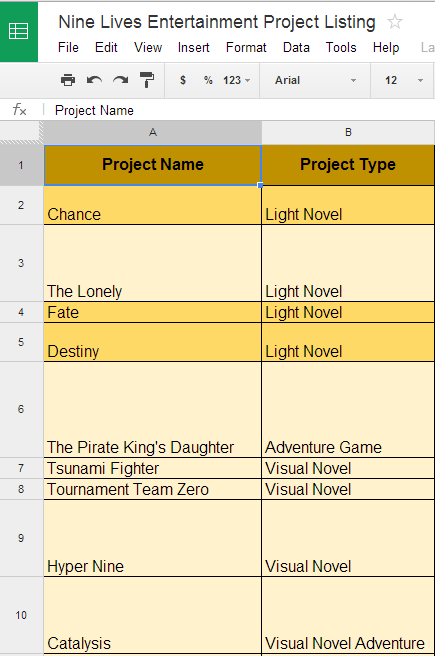 I have been hopping around quite a bit on what it is I want to do and have been doing. I’m taking three programming courses this semester, and that’s left me with some time to work on writing, but I keep hopping from story to story. That means that I need to work on a better production schedule. Right now I’m toying with the idea of adapting several of the works into light novel experiences before moving on to my first visual novel.

The production schedule will probably see the studio releasing two to three products a year. Yes, products; I’m definitely trying to move this toward a more formal, product based experience. Expect that our first light novel will be free to the public. I’ve put a lot of work into getting the project folders for each story concept and storyworld together, along with the documents within it. Building this company is something I’m really serious about. I know that I’m a good storyteller and I hope I can bring these stories to the world.

I got a chunk of programming done for The Pirate King’s Daughter. I’ve really been working on making that more mechanics based; it’s going to be an adventure game.

Finally, I’m changing the name of the studio to something in English and a bit more relevant. We’ll likely then be moving domains soon.

I’ve been working on the planning stages for the middle phase of Rainfall, Tabithe’s book.

I did some more work on the Pirate King’s Daughter today. Most of this consisted of finalizing gameplay mechanics. I’ve still got to put together characters + scenarios + stories, and eventually I will need to post that I am looking for artists. Just want this to go a lot better than Matters of the Heart ended up…

Working on a testable prototype for an adventure game that’s a mix of Guess Who, dating sims, and Carmen Sandiego.